We’ve been a Frog School for some time now, using Frog3 for some 5 years, then moving to FrogLearn for the past two years. But, over this period, our VLE use was slowly reducing across the School after an initial interest, with only one department really making valuable use of a good quality curriculum site. There was little direction, nor incentive for the majority of the School to use Frog, and it was not being spearheaded as a School priority.

Until this academic year.

Getting staff on board

Back in November, 2016, I attended a Curriculum Leaders meeting with a Digital Productivity plan that aimed to embed Office 365 and Frog within staff practice, and re-energise Frog as the tool of choice for students. This plan set out to introduce a Staff Intranet portal, a new StudentHub, and a Parent Portal and School Website to complement these changes. 8 months on, we are nearing 75% completion and have observed whole scale adoption like we have not seen before.

The biggest vehicle for this was to firmly embed regular staff use of Frog. Around the same time that I had visited our Curriculum Leader meeting, there was a staff voice activity taking place to overhaul communication processes. It was decided that this would be driven through Frog.

We introduced the Staff Intranet site with a ‘This week/next week’ events process, and then started the process of moving administrative workflows within Frog too. This launched at Christmas, and critically, replaced all previous scattered communications. No more whole staff emails; no more announcements on an intercom; no more bits of paper circulating the building. All messages go through Frog.

Best of all, all our Senior Leadership Team moved to this process too. Thus, the language of staff briefings and meetings included Frog, and new initiatives considered Frog at their heart: 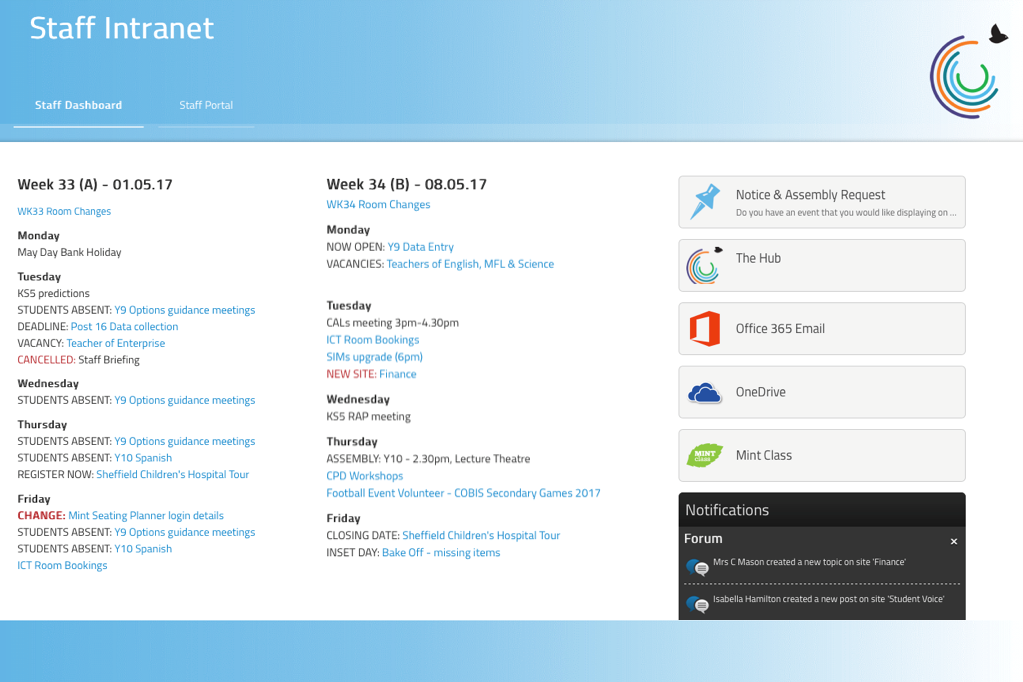 This introduction of a Staff Intranet was matched with the introduction of a new StudentHub. This was designed to further reduce staff workload and improve communication by delivering our morning Tutor Time through Frog. We previously had a site for Tutor Time, but the notices and organisation was becoming unwieldy. By moving students to a ‘this week/next week’ display, and turning the Student homepage on its head, we solved them both. And students have access to the very same page from home. 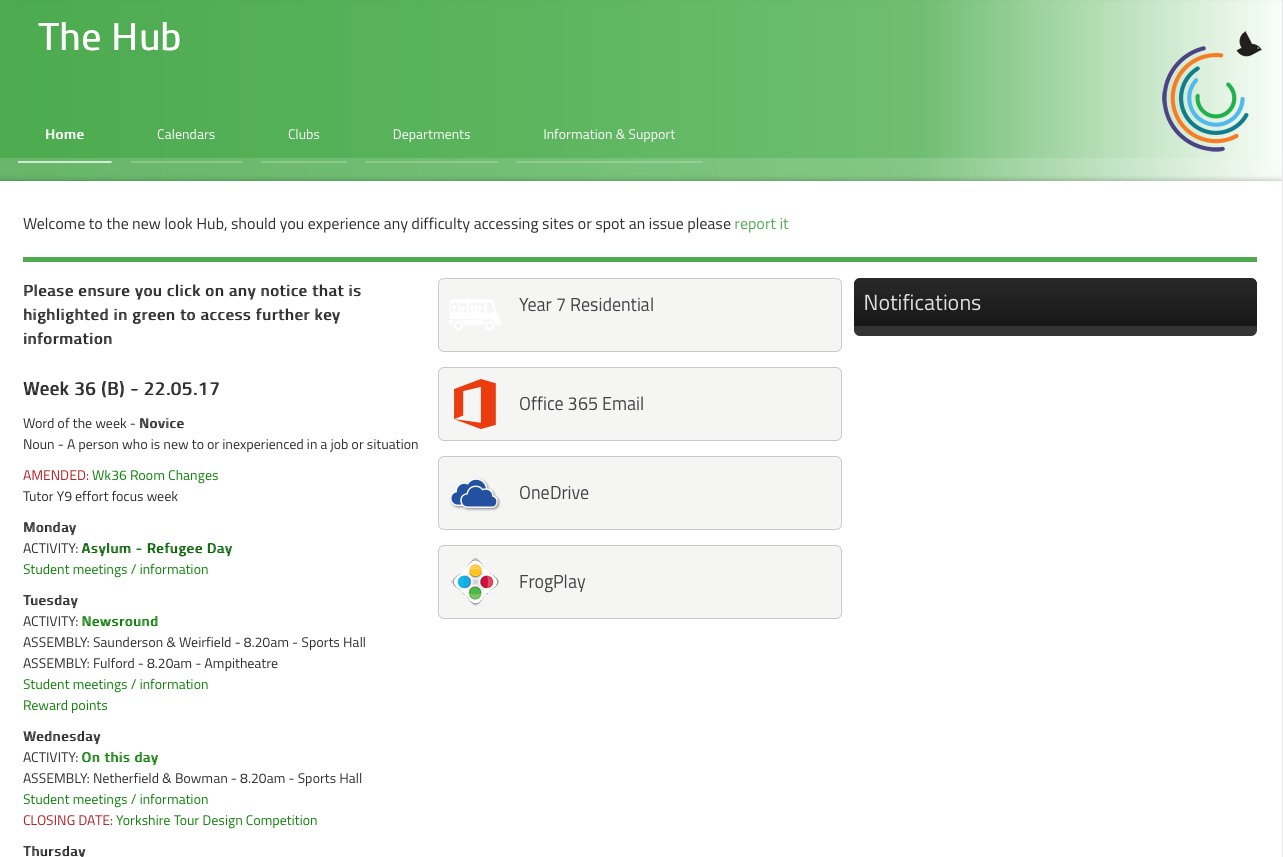 Getting parents on board with student learning and increased responsibility has been a desire of ours for some time. In March, we launched a basic ParentHub to our Y11 parents in an attempt to begin this. We issued passwords on a Y11 Survival Night, and 6 weeks later there had been 600 visits to English, 500 to Maths, and 500 to Science: 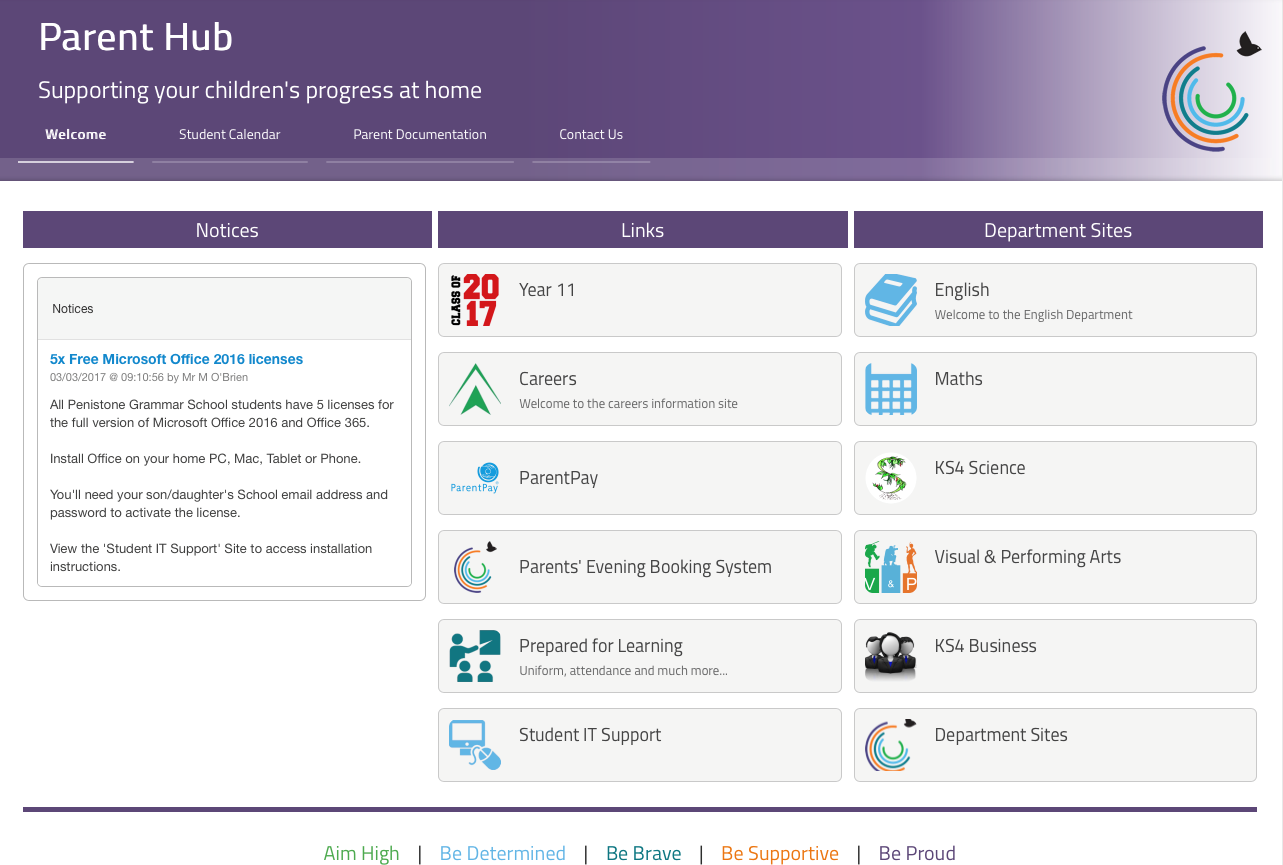 Over the course of these introductions, our administration teams made advances into Frog, benefiting from the simplicity and ease with which tasks could be completed. A vast array of sites has been created and are the single point of interest to complete tasks and workflows. For students, Y7 Residential, Y9 Options, Y6 Transition, Duke of Edinburgh were all developed in Frog.

We have by no means completed this process, but it is well underway. As part of the Digital Productivity plan mentioned earlier, this was married with a reduction in the use of Network Drives to incentivise Frog use. 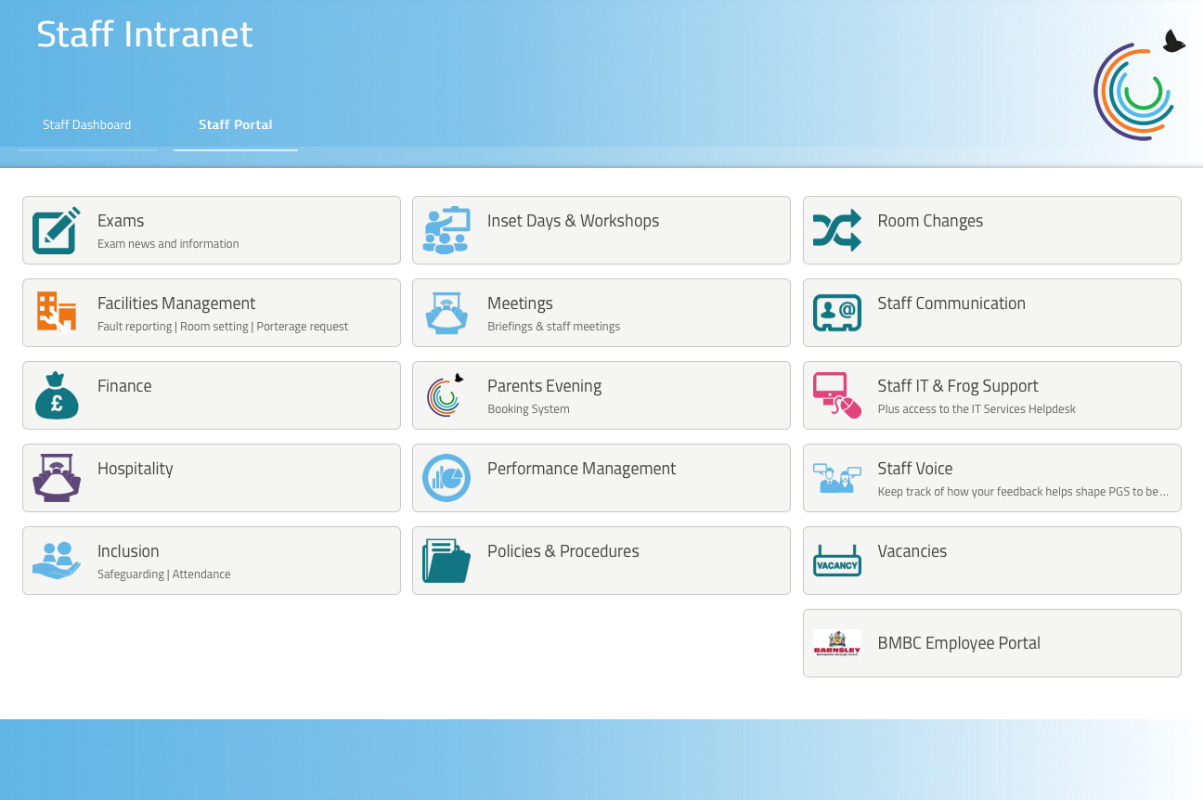 The momentum we have gained has been fabulous, and all parties involved have seen a difference. Where next? We keep moving forward, moving processes within Frog, and developing and improving what is already there.

Next academic year, Frog forms part of School Improvement Plans through SMARTCurriculum; home learning will all be assigned through Assignment Manager; all Department sites will be developed to be an integral part of learning; room bookings will stop using Google calendar; Y12 Transition, behaviour and achievement points, and year group sites are all in the plan. And we are in alpha-stages of developing our School external website in Frog.

And I’ve not even mentioned FrogPlay.

What is the key to the current success?

1.SLT being on-board, and prepared to replace existing workflows, rather applying Frog as a bolt-on.

2. Rationalising communications entirely through Frog. Staff saw the benefit and are now applying the same benefits in curriculum areas so that students get the benefit.

Alerting Parents to Behaviour Reports
Blythe Bridge High School & Sixth Form is a large Secondary school in Staffordshire. For some time, they have been successfully using Frog ePlanners for every student.
Reflecting house colours for pupils
St Andrews Catholic School in Leatherhead is a large secondary school and sixth form college. They use FrogLearn as their Learning Management System and website.
Designing a curriculum
St George International School in Madrid have taken the opportunity to adopt a fresh, responsive and engaging approach to teaching, learning, and assessment.

Ribbits Blog
Discover how Frog can be used for...